The historic military aircraft used for our flyovers include: 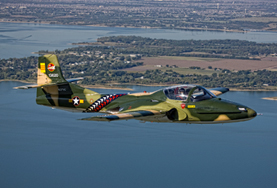 The T-37 was the primary US Air Force trainer for almost 50 years. This one is one, of two, in the US civilian registry. 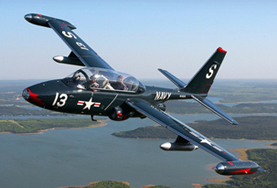 The Temco TT Pinto was proposed as the first jet- powered trainer aircraft for the U.S. Military. This tandem, two-place plane was built for the United States Navy by Temco Aircraft of Dallas

In the late 1960s, most of the existing Pintos were reconfigured with new engines that increased power by about three times. These aircraft, one of which is used by SAC, are as Super Pintos.

SAC's sponsor for the TT1 Super Pinto is Lewis Shaw 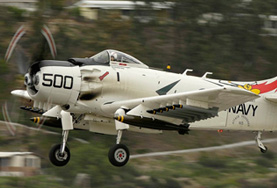 The Douglas A-1 Sky Raider enjoyed an unusually long and successful career, seeing service from the  late 1940s all the way into the 1980s! This propellor-driven, single-seat attack aircraft was operated by the U.S. Navy, Marine Corps and Air Force; as well as the British Royal Navy, the French Air Force and others.

The North American T28 Trojan was developed in the late 1940’s to serve as the next generation, high-performance, advanced primary flight trainer for the United States military. The aircraft was used from 1949 until 1983 to train several generations of Navy, Marine, and Air Force pilots. It was also used by the US military and several foreign countries as a forward air controller and attack aircraft.

SAC's sponsor for the T28 is Trojan Phlyers, Inc